WTF is going on here, fellas? 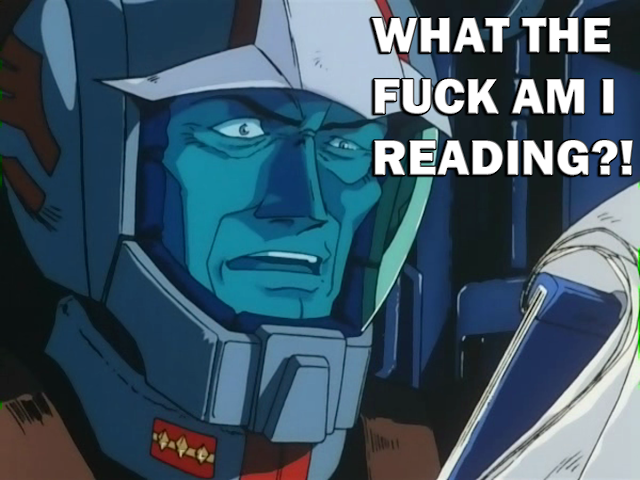 Call it. I have nothing else better to do. Yes, quite possibly. But also, I've just had supper and they say it's not good to sleep straightaway after a meal sooooo I'm vegging out in front of the computer browsing Gundam porn (Yeah, the Gundam type, mind you. What were you thinking??) and I came across THIS - A post by Gundam Guy on some of the GBWC entries in Philippines, which sparked over 60 comments and counting with all kinds of expert views, insults and essays. And I just thought...Why not weigh in on the issue since sometimes people comment on my stuff too, and thanks to the anonymity of the Internet, here we are, all keyboard warriors in our underwear furiously firing out righteous salvos after salvos in the name of namelessness because, well, without a name or a face, we're invincible, aren't we?

There's no point saying too much, save that I always feel, if you wanna say something, at least put your name on it to back it up, and not go under the cloak of anonymity, cos it's always a cop out. So after reading all the comments, some thoughtful some amusing, some right on, here are my conclusions about three general syndromes of Internet behaviour which Gunpla is obviously not immune from:

1) IF YOU CAN'T INSULT SOMEONE TO HIS FACE, INSULT HIM ONLINE.

So let's start with the kitbasher. Pun intended. Do not mistake the kitbasher for an expert modeller who can meld kits to his will and create a masterpiece. Nono the online version of a kitbasher is literally, that. A basher of kits. Sure, we've all been guilty of that. We've all came across a kit that made us cringe in disgust. We've bitched about it to friends over drinks. But. That's not quite the same as going online and making public, your low opinion of someone else's work. Unless you're ready to reveal your name or alias. I mean, c'mon. Hurling insults under 'Anonymous' is like taking a mud-sling at someone when he's not looking and then getting the f*ck outta there before he spots you and hunts you down. Well actually, I suppose there are some who think that's actually a sound strategy in real life LOL. I actually agree with this. The same goes for sports fans, rite? I could say Lebron sucks. But Lebron could sure kick my sorry ass in a game of hoops. But I'm the fan. And Lebron's the pro. He should be able to put up with it, right? BUT here's the deal - the same way you don't have to be an artist to totally insult a piece of art, likewise, you don't have to be an artist to suggest some improvements to an art piece you think is lacking. In other words, constructiveness. Sure, voice your displeasure, but how about offer something constructive to balance it out? No one's gonna shoot you down since you already had the balls to voice your displeasure no? Surely those balls are capable of good too?


3) THE WORLD IS CLAMOURING FOR YOUR OPINION 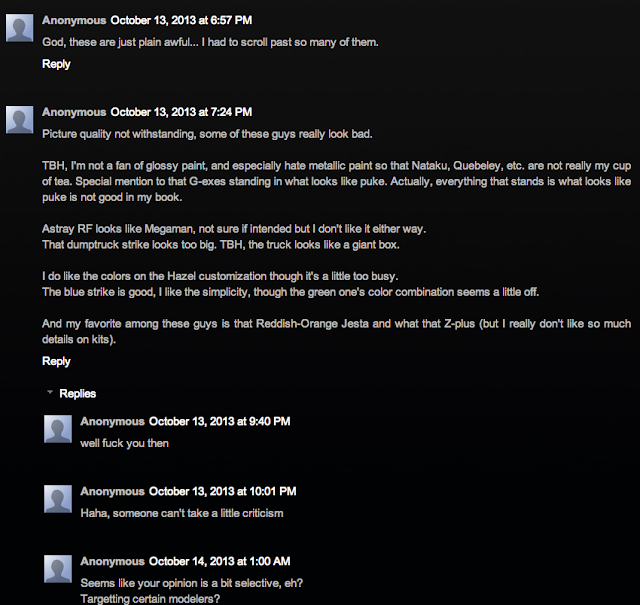 Unless you're Kawaguchi san or the Ora Zaku grand winner, the world is unlikely to be clamouring for even a fart of an opinion from you. That applies to me too LOL, but I write my opinions (like here) anyway because this is MY blog, and I ain't that dirty A-word....'Anonymous'. So when people write like they OWN the damn Internet, or are indeed true-blue artists worthy of passing judgement on inferior art, but then have nothing to show for or *yawn* hide under the Anonymity Cloak, it's kinda hard, at least for me, to call it a 'critique'. A critique should be well-balanced, not only in content, but emotion, meaning you can slam the shit outta a piece of work, just don't sound like a pompous ass doing it. Which is hard, actually...So why not, DON'T? LOL. Oh, and did I mention that critiques would be more credible if the critic were NOT that 'A' word (which is worse than 'asshole')......'ANONYMOUS'. Geez man. If you went under the alias of 'asshole', that MIGHT make your smart-alecky critique credible, since you're actually capable of humour and honesty LOL.

So there you have it. Observations that aren't exactly anything new, but I find so intriguing in the context of Gunpla. Probably we have been guilty of one or all of the above syndromes at some point in our Internet lives. The Internet just really releases the inner assho-....I mean Anonymity in us doesn't it? ;D And there is no right or model comment. But once in a while, in the sea of negativity, snarkiness and wise-guy self-righteous theses, one pops up which is actually palatable and you go: Hmmm...this guy makes sense. Well whaddaya know? There's actually a non-idiot residing behind one of these cold screens. And then you don't hate him so much for being 'Anonymous' LOL. 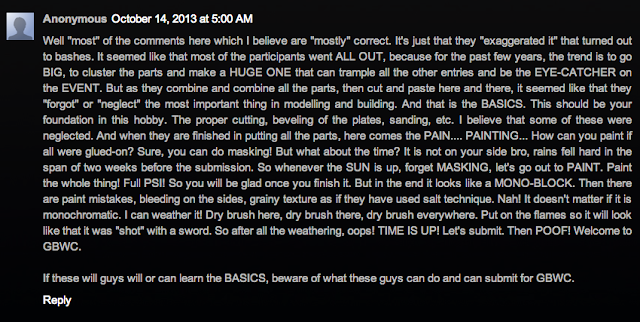 I also leave you with an updated post about Malaysian master-modeller and multiple Top 3 winner Raymond Loke, who has the balls to post under his real name and address these trolls. Sure, it's the Internet, expect trolls. But sometimes it's nice to remind trolls of their place in the REAL world. And I think Mr Rayloke did just that. A salute to you bro! There will always be trolls who claim they do not need to be master modellers to critique an entry like their opinion matters. It warms the coffers of my heart though, to think that as much as these fools hide behind their screens and the cloak of anonymity snickering and trolling away, they will never create any work of art that is worthy of praise, much less win anything. And even though they act like they don't care, fact is, they do. And deep down they probably know they can't. Poor poor bastards.... LOL 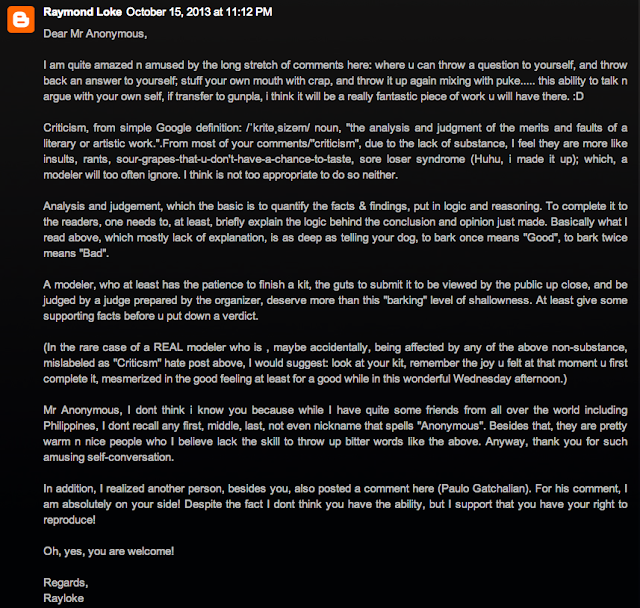 And now, back to building kits.
Posted by Waylander at 6:00 AM

"If you went under the alias of 'asshole', that MIGHT make your smart-alecky critique credible, since you're actually capable of humour and honesty LOL"

Quote of the day

They're sore losers, the lot of them. Too cowardly to post with their names.

...jeez... for all the pain, for all the love that is gunpla... its true that there is a continuin hate/love relationship between builders and hobbyist/collector, I just not realized how far the hate has reached the globe.... gunpla has exceeded boundaries and race... so maybe its not impossible to have the darkside that goes with it.... I just cant digest it tho...

been away for a while..backread...backread...holy crap Rayloke mentioned my name! I have just been recognized by the upper echelons of the Gunpla community! One of the more sensible posts, but I still think Mr. Anonymous should grow some balls before he even attempts to reproduce. Seriously though, I just hated how some people can criticize without putting their real name down. Then again, this is the internet, where you can screw people without wearing protection and get away with it. I'm kind of glad now that I wasn't able to participate in the event. While I'd like to experience an actual competition, it can be very discouraging to have faceless people with probably zero credibility bash your entry knowing how hard you worked on it. Maybe this is why many good builders keep their work to themselves? I guess in the end it's how you take the criticism and improve yourself. Still, I believe you should only improve yourself so long as you are having fun and loving your own work. The moment your enjoyment of this hobby comes from the satisfaction of people other than yourself is the moment you start loosing love for the hobby.