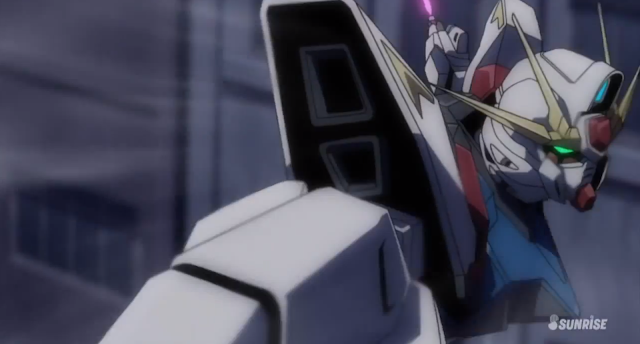 So you'd probably say I'm a tad slow, because Sunrise's latest Gundam series 'Gundam Build Fighters' is already out for a while now but I'm only just started on eps 1 and 2. What can I say? Age was a letdown...I didn't even bother with Gunpla Builders (was that what it was called?)...and when I saw the kiddy-like trailers for GBF, I was like mehhhhhhh. Not another Pokemon. Despite friends telling me it's actually not bad if you sit through all the kiddy stuff, I couldn't sit past ep 1. Lost interest midway through. But then a few nights ago, out of sheer boredom I returned to it and lo and behold, I actually lasted till the end of ep 2, and am looking forward to ep 3! LOL. BUT first things first - the series is probably the MOST unrealistic of all Gundam series. Not because toy gundams can fight in a VR game. Nonono, actually this technology might be Gunpla of the future, who knows rite? But nonono GBF is unrealistic bcos of something ELSE. Here's my case:


1) Unbelievably hot MILFs....who can dutifully man a hobby shop.
Really? Have you ever seen one (or married one?) Cos I haven't LOL. Sei's mum looks more like his bigger sister than his mum. And that's not the only part of her that's uhhhh...big. ;D And if you're that hot what would you be doing manning a stuffy old hobby shop? I have difficulty wrapping my head around that LOL. 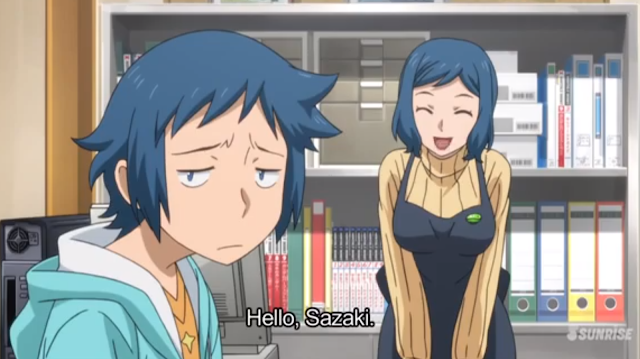 2) The school's alpha male is not the resident jock, but a GUNPLA MODELLER.
Cmon. Hunks and pretty boys don't build gunpla. They're too busy chasing pussy. (Or being chased) We gunpla nerds are an ostracised segment of society rite? LOL 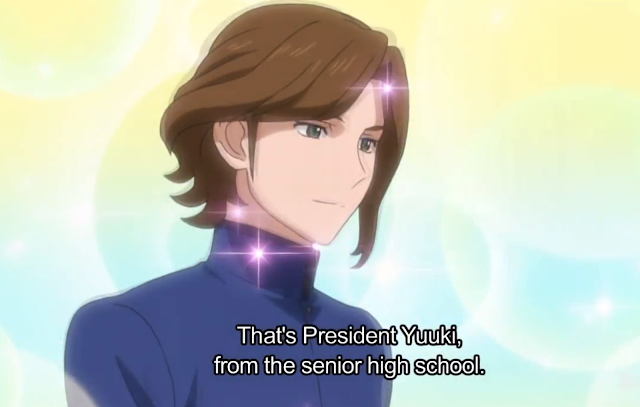 3) Gunpla is an actual CLUB in school, with an actual WORKSHOP
Seriously? I would never graduate from a school like this. 'Nuff said. 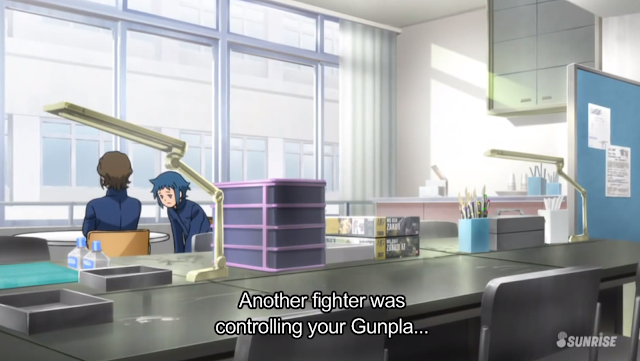 Okay fooling around aside, let's get down to serious stuff. I can't care less for the plot, to be honest - it's just kids fighting kids...wait...isn't that kinda like what we do in real life GBWC? Overgrown kids fighting overgrown....never mind. LOL. So what I really like in the show are the fight scenes and iconic suits fighting against suits from another universe. Ho yeahhh. My fave so far is the Sumo. Man where can I buy an MG version of this mother? 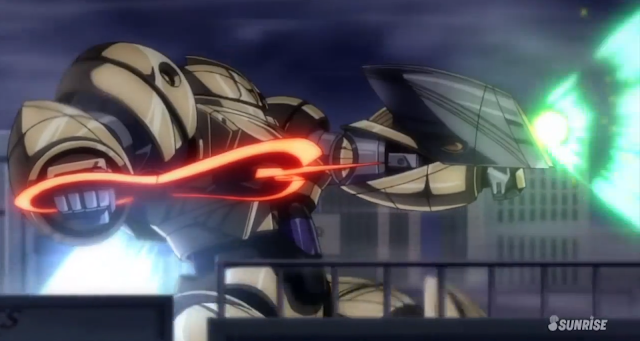 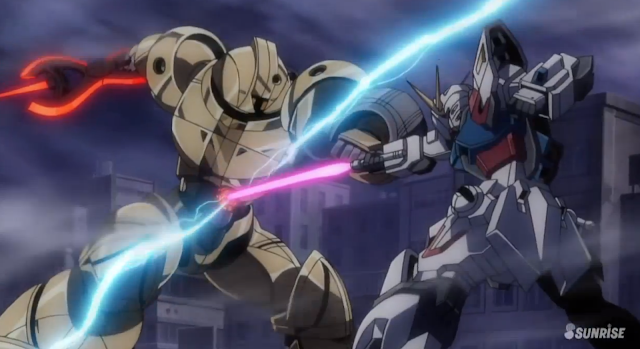 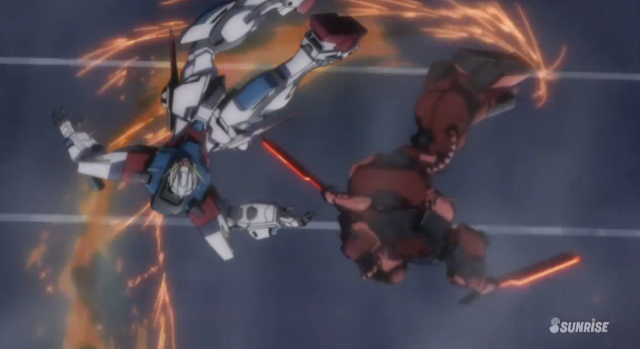 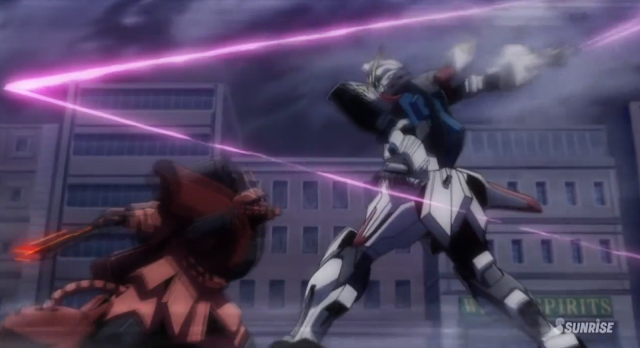 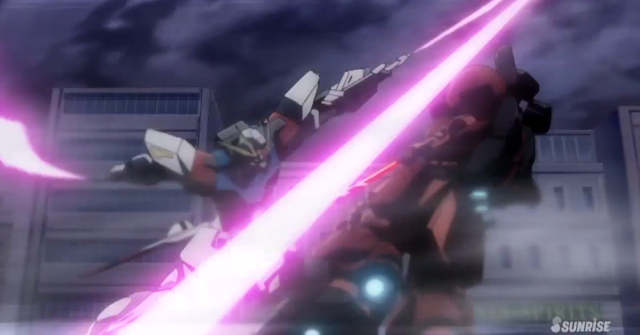 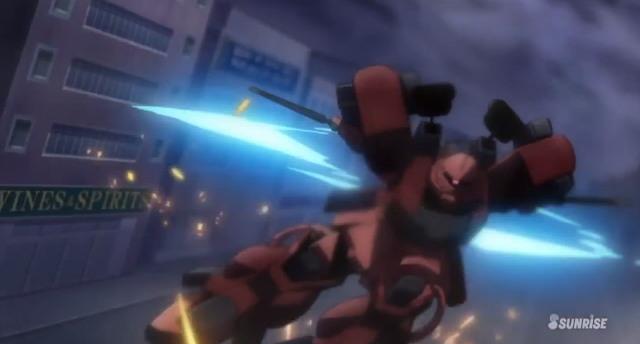 You can't blame me for sounding like a kid. It's a kiddy series rite? LOL

It's a projection of the competitiveness in GBWC isn't it? Your kit against mine. Fight! Only in GBF the kits actually DO fight and win on merit. Whereas in GBWC errrr they fight by being 'judged' LOL. Goddamit.... if kits could actually fight in VR everyone would be making mobile armours. But I think that's a really fair way to judge competitions dontcha think? Some suits can take out MAs after all. Remember the Exia shittin' on that gold MA in 00? (Speaking of which are we gonna see 00 suits - my favourite of all time - appear in GBF? Shhhhhh don't spoil it for me!)

So I'm on to ep 3 and hopefully this series doesn't sputter into an anti-climax like Age. And I hope the suits get meaner and more kickass. That Build Strike ain't all too bad, but after you've seen Seira Masuo's version, you probably don't really feel like buying it...unless you can do a better version LOL. 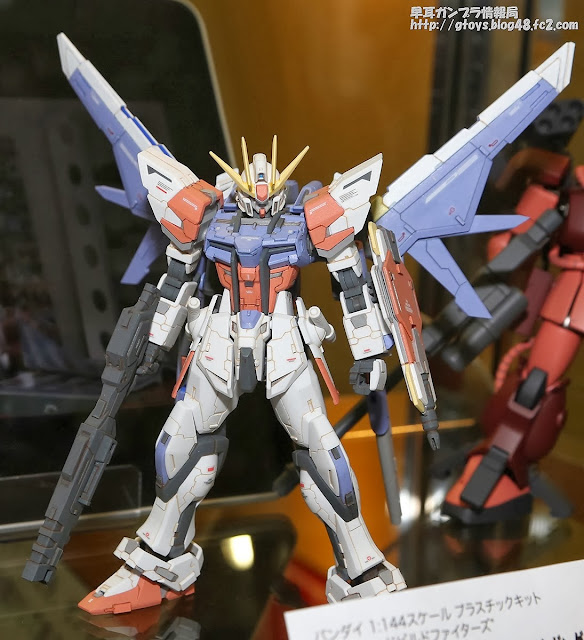 Posted by Waylander at 1:24 AM

Well a GNX got owned by an asshimar